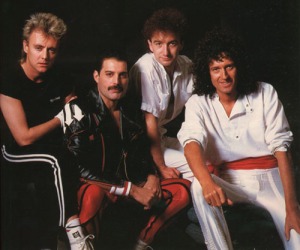 QUEEN, for me, is a band fronted by the late, highly energetic, slightly shocking and ultra-talented Freddie Mercury.

Freddie’s presence filled arenas, stole the show from the other talented men in the band. Mention Freddie’s name and most people know his music – Bohemian Rhapsody, Killer Queen, Crazy Little Thing Called Love, Somebody to Love and on and on. Mention the other band members by name and fewer people will recognize them, let alone know their compositions. Sad, but true.

QUEEN, as a whole, was a unique and amazing band. The four members worked together to make music that has stood the test of time… and will continue to do so. Unfortunately, Freddie’s been gone for nearly 17 years now. John Deacon, bass player, retired from music soon after, and Roger Taylor and Brian May have continued to tour with the QUEEN name and with another singer – Paul Rodgers of the bands Free and Bad Company.

Paul, in his own right, is a great talent. However, avid QUEEN fans resented him “taking Freddie’s place”, not that any one ever could. QUEEN + Paul Rodgers, as they called themselves, had a great run. They attracted the attention of old fans and new. They’ve brought the music of QUEEN out for live performances again. What QUEEN fan wouldn’t want that?

Of course, we want Freddie. But we can’t have him. Some fans have a hard time understanding that. Some fans feel Brian and Roger should simply give it up. Drop the band’s name and go on performing under a new name. Let QUEEN rest as Freddie rests.

Others, however, are thrilled to hear there might be a new QUEEN + in the works. 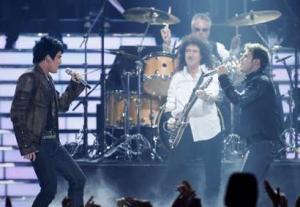 I’m an avid Freddie Mercury fan. Freddie’s flamboyant, over the top performances can never be outdone. However, truth be told, I wouldn’t mind hearing Adam sing some of Freddie’s songs. He could do it. He’s got the range and he’s got the guts. Adam with QUEEN just might work, in my opinion, because Adam is that kind of showman. He seems to enjoy prancing around on stage – much like Freddie, only not. He sings high and low notes with amazing ease. He can pump it up to a frenzy and take it down to almost lullaby bliss. He’s high-energy. Shocking. Non-apologetic. Young. Appealing. Controversial.

Sorry QUEEN purists, I think Freddie would be impressed. As would I.