My muse has been known to take wrong turns now and then, wandering as it does in a never-ending search for something dark and mysterious or sparkley and fun to play with. Because of that never-ending quest, it’s not uncommon for my wandering muse to wind up caught in some murky, quick-sandy bit of gray matter. How do I lure it out? Exercise, coffee, daydreaming… and writing prompts. Bits of story fodder lie everywhere but when the muse is otherwise occupied, they can be hard to find, or, once found, impossible to develop.

A story prompt sits right in front of your eyes, luring the muse from that darkened corner, tempting it with just what it’s been seeking. A dark and mysterious idea or a fun playful place in which to frolic.

Today, my muse has been lured by Jon Nathanial Corres and Willow Raven and my thanks go to them for providing a beautiful and magical writing prompt. You should see it full size – and can find it here – Willow Raven – BLUE SATIN SASHES.

Along with the prompt came a challenge which was, actually, posted in June even though I’ve just found it now. The challenge is to write a short piece inspired by the Blue Satin Sashes image… and, of course, a short piece has the potential to grow into a larger piece… unless the muse steps into quicksand again.

I’ve accepted the much-needed challenge, and I have titled my short piece: His Again. This was fun to write and I hope you find it fun to read. 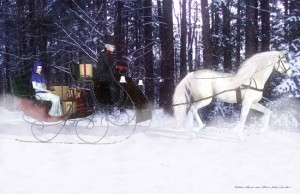 Snow filled the air like down from a pillow, softly floating in waves playful and billowy. White and innocent, it shimmered in the moonlight, unfazed by the cold and dark.

He held out his hand, palm up, to capture the beauty. It faded, wounded by his heat, writhing until only a single droplet remained. Cold, small. Gone.

A low rumble of hooves broke through the silence, and a golden light bobbed in the distance. Snow stirred from the ground as the carriage neared and falling flakes scattered as to clear a path far and wide.

With a small nod and a touch to the brim of his hat, he welcomed the bundled coachman. And then on he strode to the carriage door.

Through the small window, he saw her. Her white winter cloak, as innocent as snow. Her bonnet tied beneath her chin with a blue satin sash.

He met her gaze, and saw moisture there. It was from cold, he would believe, for despite the past, she had chosen to see him again.

She rose and he hesitated, not wishing to mar such exquisite beauty. She waited. Her eyes, blue as the satin, challenged.

He dared hold out his hand, palm up, to capture the beauty. And she laid her hand upon it. Cold. Small. It did not fade but remained. Solid and warming. His to hold once again.

What do you think? Did the image stir your muse? I loved writing this short and would love to read yours, too. If you write one, please let me know in the comments.