Johnny Depp is my Grindelwald 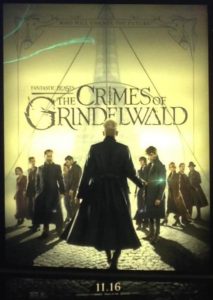 Lord Voldemort is no Gellert Grindelwald.

Why? Because as a villain, a dark lord, Lord Voldemort was so extreme, so vile and hateful and cruel, that he was easier to see as fictional than the insidious Gellert Grindelwald who easily wins people over to the dark side with soft words, a gentle touch and a deceptively calm demeanor.

Anyone who has stopped by here knows my love for the Harry Potter stories, and how much I admire the way they shaped the reading habits of an entire generation. My own daughter grew up with the books – reading them numerous times in English and in Russian.

Naturally when Fantastic Beasts came out, we were eager to dig into that adventure as well. Though not as spellbinding as Harry’s story had been – with the newness of it all: Hogwarts, Hedwig’s Theme, wands, cloaks, magical spells and good against evil – Fantastic Beasts and Where to Find Them as well as The Crimes of Grindelwald, do have their own magic. Their own newness. Their own sense of foreboding.

Attractive Villains are Easier to Love

As a charismatic and cunning villain, Johnny Depp’s Gellert Grindelwald confidently stood in the center of a crowded arena and told the people who had come to hear him speak of the evil that we, the ‘others’ – the muggles/no-majes – would inflict upon the world. He did not lie to them. He had no need to. Instead, in a blinding and vivid vision, Grindelwald showed them the coming horrors and destruction.

Yet Grindelwald’s plan to prevent it all – a plan willfully applauded by many in attendance – was darker, more horrific and destructive than what already seemed fated to come.

Sadly, he offered only one of two nightmare scenarios. And each was tainted by the lust for total dominion of one people over another ‘lesser’ kind.

The pitting of one people against another, the vilifying of whole groups, of blaming them for all the world’s ails…is as old as time. That’s why I find Johnny Depp’s spellblindingly understated portrayal of Gellert Grindelwald so terrifying. He’s refined. Beautiful. Charming. Yet beneath that compelling mystique are hints of a bubbling cauldron’s worth of power and emotion.

Warnings signs are all around us, in plain sight. They have always been. Yet while generation after generation adopts the slogan: “Never Again”, that same frightening and divisive call to arms is too often repeated. In film as in real life.