Freddie Mercury – The Show Must Go On 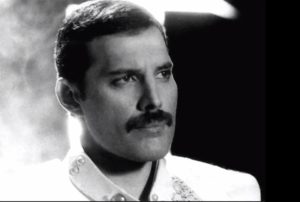 “I don’t have any aspirations to live to 70. I don’t want to sound morbid. I’ve lived a full life and if I’m dead tomorrow, I don’t give a damn. I’ve done it all I really have.”
– Freddie Mercury

Today would have been Freddie Mercury’s 70th birthday. As a life-long fan of the man, I know he wouldn’t have been on stage “prancing” about at this age, but I have no doubt he’d still be creating beautiful music. He might have even recorded a few songs himself – with that voice. That amazing, soaring voice.

No one knew it for sure, but he had less than a year of life left in him when he recorded this song. He was exhausted and in pain, yet he stuck with it, “downed some vodka” and, according to Brian May, Queen’s guitarist, he “lacerated the song” with his voice.

And that he did.

This one has always given me chills.

If you’re a Fred-aholic like I am, then you might also want to listen to this version of the same song – with Freddie’s vocals isolated:

My sincere thanks to QUEEN and to bart1997rinaz for posting these videos on Youtube.