For the past few weeks, I’ve shared ghost stories with you – and how fitting that is, since Halloween is just around the corner.

I’ve shared ghostly images and voices. And now I’m going to share a video. This is the one I’ve promised from the beginning. And it’s one I still cannot fully explain.

If you haven’t seen my other Ghosts of Gettysburg Posts, please visit them first, then come back here for the grand finale. Here are the links to the other posts – Part One, Part Two, and Part Three.

At this point during our visit to Gettysburg, we were preparing to check out of our hotel. It was the morning of Thursday, September 1st and we not only had a rough night – you might recall the “battle” experience I described in my last post – but we also rose extra early so we could get to Reynolds Woods before sunrise. We did that and it was now 9:30 or so in the morning. Time to ‘read’ our room.

Joanne – the brave one among us – set her digital recorder and K-II meter on the dresser while my daughter and I did some last minute packing and other diversionary tactics like that. Yes. We were unsure whether to tempt the fates.

A K-II meter, remember, is an EMF or electromagnetic field detector. It is said that K-II Meters or EMF Detectors, which are normally used to locate areas of high electrical or magnetic interference, can also detect paranormal activity. Sometimes, however, what appears as paranormal activity is simply electricity in the air. In our case, the K-II did not start bleeping or blinking until Joanne began asking questions like, “Is anyone here with us?” “What is your name?”

Unable to ignore the responses she was getting, my daughter and I joined in. She turned on her laser grid – a “web” of bluish-purple lights – and shined it on the wall near the door and K-II meter. The reason for that is if something were to move between my daughter and the wall, we would know because it would block out the lights. I, meanwhile, grabbed my camera and started to film the experience. After a few minutes, I set my camera – still recording – on the dresser, angled toward the door.

Rather than describe the room and our positions within it, here’s a graphic – and don’t laugh at it. I can’t draw, so for me, this is a masterpiece. 🙂 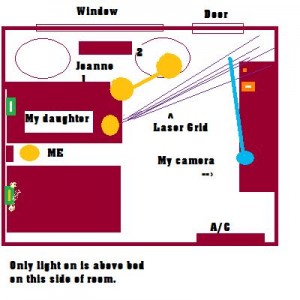 You can see none of us – even when Joanne switched seats from the edge of the bed to a chair – are in the way of the laser grid. You can also see from our positions, that only my camera was angled toward the door. Nothing else. Once I set my camera down, I had nothing in my hands. My daughter had only the purple laser grid and Joanne had only her video camera.

And yet in this first segment, there is an unexplained red orb floating around near the door and foot of the bed closest to the window.

We have NO idea what that orb is, and we did not see it at the time. Of course, now it’s easy for those who were not there to shrug off, insisting one of us must have had a red laser pen. But we did not. And we did not walk between the purple laser grid and the wall, though in this next segment, you can clearly see shadows of not just one person, but two. Going and then coming. And you can also see the room grow light and then dark. There were no dimmer switches in the room, and the curtains were drawn. All we can surmise is that this entity somehow blocked my camera lens, and the camera – set to automatic – tried to compensate.

We did not see the details of this as it happened. All we saw was something block out the purple lights – no shadows. After the second flicker of those lights, I was sure something in the room next door – the fitness room – was somehow affecting our K-II and our lights. So, I left the room, only to come back seconds later because the door to the fitness room was locked. No one was in there.

In this next segment – a replay of the end of Segment 2 – I pass the foot of the bed. Note my shadow on the door and wall. It’s nearly the same as the prior shadows… only no one passed in front of the bed before me. No one we could see, that is.

Toward the end, the K-II went quiet. As you watch this segment, note how the K-II responds to Joanne’s questions.

Here is the full ten-minute video, uncut, so you can see the progression of what happened. Throughout, Joanne is trying to communicate, and when she says, “back away” or “come closer”, she means for the spirit to move to or from the K-II meter that’s blinking on the dresser. Theory is, the closer an entity is to the meter, the faster and louder it would be. If this entity moved away, or disappeared, the lights would go out and the chirping would stop… as you saw toward the end as things settled down.

I’ve loved sharing our Ghosts of Gettysburg experiences with you and hope you’ve enjoyed reading about them. Hopefully, if you didn’t see certain images in the pictures I posted, or hear certain voices in the recordings, you’ll come back to look and listen again.

This was an exciting adventure. One we will not soon forget. One that has given us new respect for that which we otherwise might never have seen.