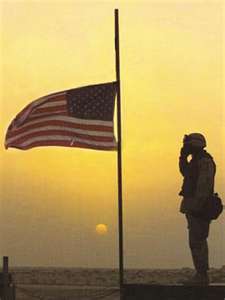 For this Memorial Day, I planned to profile one of the uncountable heroes this great country has had. I hoped for some unknown who had achieved something personal, something wonderful in its own right. I wanted to share his or her story with the world to make our troops more real, more like the boy or girl next door rather than some GI Jane or Joe way over “there”.

I did some research. Looked for names and biographies of regular men and women who served this country in the ultimate way – by giving their lives. I came upon a list put out by the Wall Street Journal that included names and 1/2 inch square headshots. Click on a name and it takes you to that soldier’s page.

I thought I’d hit the jackpot. I’d find a plethora of information on those personal pages and be able to write up my story. Instead, the soldiers’ pages contained the same basic information as on the list from page one. The soldier’s name and birthplace, their photo – larger now, the location of their service and their rank. Sadly, there was no information about who these soldiers were as people. Regular stop-over-for-coffee people.

Though limited information was given, one name intrigued me. Sgt. Nicholas J. Aleman, 24, of Brooklyn, N.Y.

Brooklyn, New York. My hometown. Here was the boy I would profile. Look at me calling him a “Boy”. He was all of 24, still a cub and yet he’d trained, fought and died for his country. That’s a man. A hero.

But I could find out nothing about him except that he’d come from a military family. I did about a dozen searches and kept coming up with the same lines about this young man. He was a Marine Reservist, had been assigned to Camp Lejeune for deployment processing and then had been in Afghanistan, supporting combat operations when he was killed.

Not much of a bio for a hero.

Eventually, I did find a few local articles about this young man. Still, I couldn’t help wonder why it should be so hard to learn about the people who have sacrificed themselves for freedom.

I even went to YouTube and searched his name. There’s someone else out there with the same name. He’s a musician. I scrolled down and then I saw something that told me at a glance that this boy was loved. It was a home video taken as the casket of Sgt. Nicholas J. Aleman, 24, of Brooklyn, N.Y. arrived at church for his funeral. The title of the video was simply: R.I.P. Buddy

I cried for that young man and for the family and friends he left behind. He was loved. He laughed and teased just like the rest of us. He hurt, he cared, he shared. Unlike the rest of us, however, he dared. Sgt. Nicholas J. Aleman, 24, of Brooklyn, N.Y went into battle – knowing each moment could be his last – and all because he believed in his country.

And yet, something disturbing about the video has haunted me since I first located it. It was posted six months ago as of this writing. Check the number of views it’s had. Seven is the number I saw when I first clicked on it. Hopefully there are more now. Three minutes, and thirty-three seconds. It’s only a procession and a salute. There are no bells and whistles, no Hollywood celebrities or gyrating dancers. There’s just a soldier coming home.

Three minutes and thirty-three seconds. I watched. I ached for his mother. I cried for his buddies, for his military family and for those of us who too often fail to appreciate that which allows us to be who we are.

At least on this one day, we need to remember what it took for these brave men and women to leave their families, leave their homes and everything familiar to go wherever they were sent, without question, with ofttimes fair-weather support from their own countrymen to regularly risk and give their lives.

On this one day, can more than 7 of us view the video, R.I.P. Buddy and share the grief? Can we, just for a moment, consider the pain and pride of the family and friends of Sgt. Nicholas J. Aleman, 24, of Brooklyn, N.Y and those like him who we will never know?