Raccoons in the roof update #2 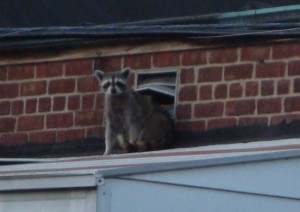 As some of you might remember from my original raccoon post and my first update, we live in a row of attached homes here in the city and during the winter, a couple (maybe 3) raccoons went house-hopping, taking up residence each night in one of our attic crawlspaces. We would hear their footsteps crunching overhead and worry they might fall through our ceilings. Fortunately, that has not happened.

Here in the city, the law is that raccoons cannot be trapped and transported. Rabies is the concern. That means all licensed trappers MUST trap and kill these poor creatures. I know some people view them only as vermin, but I’m sorry, I just will not pay someone to climb on my roof and set a trap that will slowly strangle an animal to death.

I researched and found humane ways to rid attics and other areas of raccoons. Murder is not the only way.

For those interested, here are some proven methods of HUMANE animal evictions –

~~It is best to leave them alone until mom moves the babies out.

~~Scare them out. Use caution! Just making your presence known will usually do it. Go into the attic a few times a day with a flashlight. Shine the light on them and talk to them. But if touched or threatened, by being cornered or feeling boxed in, they will defend themselves and they are quite adept at doing so.

~~If there are babies, give the mother 1 or 2 nights to relocate the family.

~~Roll some rags into a tight ball and tie with twine to keep them tight. Soak the rag balls in ammonia. Toss them into the area of the attic where the raccoon is located.

~~If you can, sprinkle Cayenne pepper or Repel® granules, a commercial dog and cat repellent, around the entry hole, both inside and out, if this is possible.

~~During the day, place a radio in the attic tuned to an all talk station.

~~Use floodlights to keep the area where they are living well lit.

~~Once the raccoon has moved out, secure their entry point. Use hardware cloth or welded wire.

In our case, one neighbor bought a Havahart trap and set it on his roof. He caught one – a VERY large one – then sealed up his roof and released the raccoon back into our attached yards. Poor creature ran off terrified – but at least s/he was alive.  Since then, not one of us has heard the pitter-patter of furry feet overhead. And ALL of us have, or are in the process of, sealing up our vents so neither we nor the raccoons will be in danger of experiencing this same situation next year.

*no animals were hurt in the making of this blog.

11 Responses to Raccoons in the roof update #2