It’s amazing what we get used to and assume is normal not just for us but for everyone.

I live in a rather populated section of the city, so there are several supermarkets/grocers in my neighborhood. Of the closest, three are on the smaller size and one is quite large. I usually go to the larger one. During my last visit there, as I was returning my shopping cart to the stall, an elderly couple was standing there grumbling about something and looking rather confused. 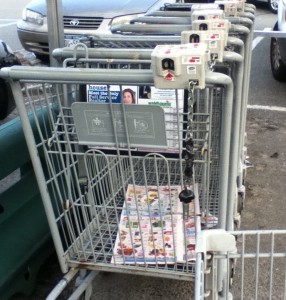 Their expressions went from confused to completely aghast. It seems they had just returned from spending several years in Florida and had never seen the contraption our grocer had set up for the shopping carts and had never considered the notion of paying for one. 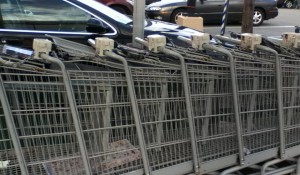 I remember when I first saw the carts all chained together. I thought, for sure, we were not permitted to use them, but I couldn’t fathom why. Annoyance soon replaced confusion however when I realized I – and all shoppers – had to have quarters at the ready so we could borrow a shopping cart.

Of course, this process of paying forced people to return those carts to the stalls rather than leave them scattered around the parking lot since the only way to get your quarter back was to chain your cart to another. It also prevented people from taking the carts home with them. And you might be surprised by how many people did just that. Some didn’t have cars so they walked their groceries home in the same cart in which they purchased them. Others used them as aides to deliver newspapers or collect nickel return recyclables from other people’s trash. And still others did it just to be wise guys and then they’d leave carts around the neighborhood in all sorts of places – like abused mutilated bodies or failed art exhibits. I guess the description depends on your point of view… 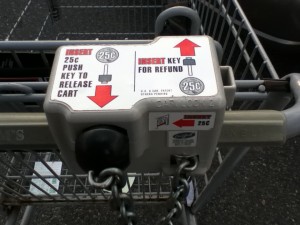 About the couple from Florida… I showed them how they, too, could gain the prize of a shopping cart, explaining how to use the key to plunge the quarter in fully in order to disengage the cart holding it in line. I laughed when the women muttered something I know I muttered when I first saw these things years ago, “What a stupid idea. Who thought of this?”

I just hope they remembered how to get their quarter back once they finished with the cart.

What about you? Do your grocers make you pay for a shopping cart? Are there other inconveniences or oddities in your area that you once thought were universal then learned were unique?