Voices Within an Empty Room

Just a few months ago, we investigated a report of paranormal activity in a nearby bus depot office. The claim was one of benevolence not malice. It was presumed that a spirit of someone who once frequented or worked on those grounds – which at one time were part of a military base – still resided there. Whoever the spirits are, they seemed curious and interested. Or perhaps, unaware they now lived in another realm.

Visitors to the office reported being tapped on the shoulder as they entered. The woman whose office it was, reported hearing noises and voices around her as she sat behind her desk or at her computer. There was a sense of calm, however, not concern. A curiosity most of us would feel if we heard tapping on our keyboard while we were not typing, or if we sensed someone standing behind us though there was neither a person nor room for one between our seat and the bookcase at our back.

So, we arrived one evening, around 6:00 and set up our equipment, ready for a long and interesting chain of events. We heard nothing. We saw nothing. We felt comfortable, safe and unconcerned. None of the feelings one might associate with paranormal activity came to us.

Upon reviewing the evidence, however, we did find one interesting photograph and several astounding audio recordings. Let me say right here – we had to dismiss most of the audio recordings though we truly believe we captured disembodied voices on them. There was simply too much contamination on the audio since people in the outer offices were speaking much louder than even we had realized.

Having said that, let me add this – two audio clips are keepers and, to us, solid evidence.

First, to the photograph… 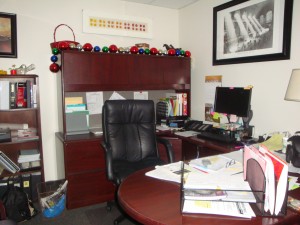 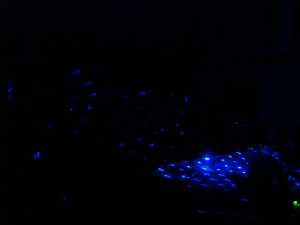 THIS one was taken between the two pictures above. I saw this while we were there as I scrolled through my images. It might take a little looking, but if you compare the above image and this next one, you just might see the face we captured. The scale is off, the angle is odd, but there is a definite facial structure in near profile in this image. It looks to be in the area of the ‘wingback’ section of the chair.

I will post four versions of it – one as is, one indicated, one indicated in black and white because sometimes these things can be easier to see that way and one closeup and indicated in color… note in the photo above and in this first one where the green and red lights are (simply so you can compare locations to the first photo) – 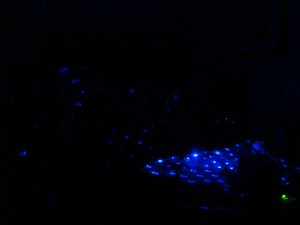 In this picture, can you see the red glow from my recorder? (Click on it to zoom in, it’ll open in another page)

Slowly, look diagonally up and left. You will see a bright bluish dot and then two vertical blurs of blue. Look a fraction more to the left and up. See a small horizontal bit of blue? The face is just to the right of that. See it? It’s indicated in the pictures below… 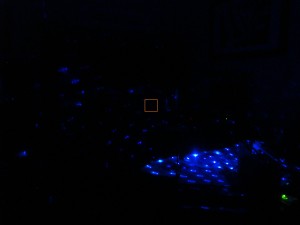 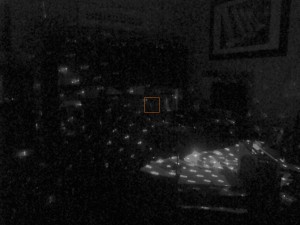 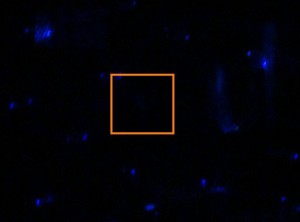 See it?  Bring the image up closer if you need to. Give your eyes a chance, it is definitely there.

Once we completed our investigation, we started chatting with the office personnel and after a while, I decided to go back into the now-empty office and set my recorder down. Just in case. I closed the door, yet you can still hear our voices coming from the front office area. If you listen closely to this clip, you will hear different voices, at a different level than ours. To me it sounds like two women. This is only a minute into the recording and it seems to me as if these entities found my recorder to be of interest. To my ears, it sounds like one says, “Where?” and the other replies, “There.”

You will need headphones –

From 2-11 seconds you’ll hear us in the other room (with one of the women walking right outside the closed office door at 11 seconds when she mentions a printer ‘squealing’). Then you’ll  hear white noise until… 31 and 32 seconds when you’ll hear the other, disembodied voices (only with headphones). Remember, no one is in the room with the recorder. btw – I kept the white noise in there so you could hear the difference in the sounds. Sometimes, when you just start an audio clip at the actual EVP, it doesn’t sound as fantastic as it actually is.

And in this clip, less than a minute later, you can hear one of the women speaking in the front office but then there are two whispers. It sounds to me like the first says, “Two or three?” and the second responds with a forced whisper, “Don’t know.”

Listen – first there will be outer office chatter. It goes on until 10 seconds. Right at 8 seconds, if you listen very hard past the regular voice, you’ll hear the whispered, “Two or three?” At 11.5 seconds, you’ll hear the rather distinct whispered reply of, “Don’t know.”

To me, they sound curious, harmless. We don’t know who they are or why they’re lingering there but we hope to go back on another day, when no one else is there, and ask some questions. Hopefully, we’ll have more evidence to share.

Meanwhile, I hope you were able to see the face and hear the voices – and if not, look and listen again. Trust me. Once you see and hear it, you’ll be rather amazed. .