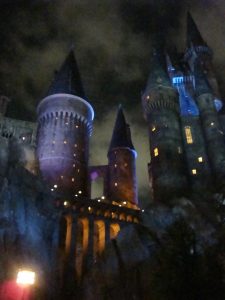 On July 31st, 1991, Harry Potter turned 11. It was on that day, 27 years ago today, when Hagrid presented Harry with his Hogwarts’ letter. The same day Harry received his letter, his life – and the lives of nearly an entire generation of children – was forever changed.

I was introduced to the Harry Potter franchise when my daughter was in first grade. It was Halloween, and there was a parade at her elementary school. Children and teachers alike wore costumes – pirates, Power Puff Girls, Ninja Turtles, and more. Most memorable, however, was the school principal’s costume, which was a long black hooded robe, round glasses, a wand and a hand-drawn lightning-bolt scar on her forehead. I confess, I had to ask her who she was supposed to be. She looked at me, dumbfounded, and said, “Well…Harry Potter, of course!”

“It matters not what someone is born, but what they grow to be.” ―Albus Dumbledore

Immediately after that, I introduced my daughter to the books, and then to the movies. And that was when we became a Harry Potter family. We watched in awe and wonder as Harry, Ron, Hermione – and all the rest – grew from wide-eyed wizards studying potions and wand-work, to young adults bravely fighting demons so fierce, so cruel, even the elders among them doubted their chance for success.

As adults, we often teach our children that the world is not black and white, that our foes are sketched in as many shades of gray as our friends. Yet, I wonder whether we teach that lesson in word only, rather than by example. And I wonder, too, whether our children are wiser than we might expect and see those shades of gray all on their own.

“We’ve all got both light and dark inside us. What matters is the part we choose to act on. That’s who we really are.” ―Sirius Black

As we read the books and watched the movies, Harry, his friends, and even Draco, grew into young adults with a healthy skepticism of those around them. They had a keen awareness of a complacent media unwilling to address the first hints of danger. They also harbored a healthy rebelliousness against language and ideas that were divisive, bitter, and cruel, even when that language and those ideas came from authority figures.

We watched young Harry become a man as he learned that while those who chose to be Death Eaters were one form of evil, so too were those who willingly ignored the slow and steady rise of evil in favor of personal gain. We even watched as Draco came into his own as he learned, too late, that ‘otherness’, which was so passionately loathed by the elders he idolized, was not, in fact a “crime” at all, nor was it an offense worthy of death.

I wish our kids the same fortitude displayed by Harry and the gang as they face the challenges this world presents. I wish them stamina, foresight, and trust in themselves – no matter what others say – to know they have the ability to change the world. To turn on the lights when times are dark. To see the value in friends, family, and strangers – both familiar and unique. And I wish them the wisdom to know that, while they each have those abilities within themselves, we are all so much stronger together.

“We are only as strong as we are united, as weak as we are divided.” ―Albus Dumbledore

Happy Birthday, Harry… or perhaps I should say “Happee Birthdae, Harry”, as Hagrid did that magical day so long ago. And thank you.