A HAUNTING WE WILL GO – Old Bethpage Village Restoration

You would think with the winter months upon us, I’d be home in front of the computer pounding away at posts for this blog. Well, this winter in New York has been so mild, so lovely, that I’ve been out and about for much of it. 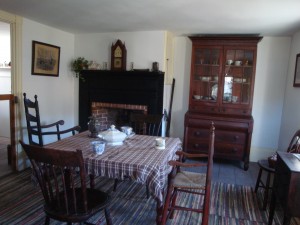 ne of my outings took me to Old Bethpage Village Restoration, a historically rich location that makes me think of Colonial Williamsburg and how it might have looked in its earliest planning stages.

Known as the Jewel of Long Island, Old Bethpage Village Restoration (OBVR) has been severely underfunded and budget cuts have cost it the “living history” part of its description since almost all of the full time costumed interpreters have been laid off. Fortunately, new management seems interested in revitalizing the Village and our hope is for a rebirth.

Meanwhile, as the Village stands cold and closed for the winter months, a skeleton crew – of sorts – is charged with maintaining and cleaning the buildings. Each house in the Village was brought there from another part of Long Island, each teaming with its own history. Some of the furnishings in the homes belong to the family that once lived there, other furnis 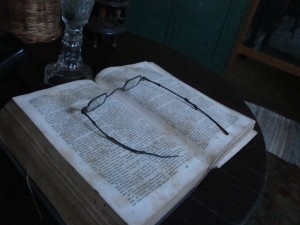 All of this makes OBVR a prime location for paranormal activity. Because of that, one of the updates I would love to see in this village is a regularly scheduled lantern ghost tour. When I am in the Village, there is no question in my mind – Here, there be ghosts.

On a particularly sunny cleaning day, we brought our cameras and digital recorders. There wasn’t much activity that day, mostly personal experiences of cold spots, unease, dizziness and headaches. In each home, however, we captured whispered voices, barely audible. I will share four that seem the most vivid and urge you to use headphones for a fuller experience.

If I sound less than disappointed about our soft bits of audio evidence, it’s because of the phenomenal visual evidence we captured. At first, I was excited, then I became frightened. I don’t know what or who we captured in the pictures I’ll be sharing here, but as I considered it, I realized, we’ve never felt threatened in those homes so our perception of what ‘good’ and ‘bad’ looks like is just that, perception. We don’t know what’s on the other side and so we shouldn’t make judgments – can’t judge a book by its cover, right? 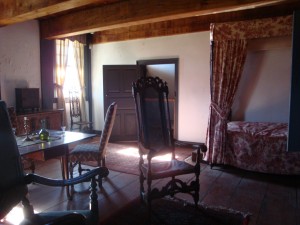 A word about the recordings on this page. For some reason, the player will play all of the recordings in succession. Just press pause to prevent if from continuing until you’re ready to hear the next track.

And so without further ado…

In the Schenck House – a home built in 1730 by a Dutch Farmer – We are standing at the front door having just walked into the house and locked the door behind us. I just noted the size of the floorboards and beams – HUGE gorgeous wood – when a light sing-songy female voice comes from the space immediately around us. We know it’s not us because it happens as I’m talking about the beautiful wood and my daughter laughs. We didn’t even hear this voice at the time.

The Williams House – build by a master house carpenter, Henry Williams, in 1820 – is known for its hautings and though presumption is its residual not intelligent, some of the otherworldly ‘comments’ tell us the opposite. Take for example this bit of recording while we stood in the parlour –

Listen hard for the whispers, there are two. The first is at 7 seconds, about two beats after I say, “You have a beautiful house”, the whisper sounds like, “What?” The second, at 11 seconds, sounds like a slow, drawn out, “They’re here.”.

At this point, we are upstairs, talking while we work. Listen at 4 seconds. We hear a frustrated – almost weary and bored of our presence – “Go home.” Just before the whisper, you’ll hear silence then us talking in the background.

And finally, at the Noon Inn, built in 1835, we climbed up to the attic. Well, I didn’t. I stood on the steps to the attic and had to come back down. I felt heavy, the air thick. Cold. My daughter followed me down and our friend remained on the stairs, feeling uncomfortable and asking me to take her picture at that moment because something did not feel right to her. The first picture you’ll see is the photo I took at that moment and cannot explain. Look to her left. Right there in black on the stairs.

Please forgive me, but I’ve chosen to delete this image due to some ‘darker’ comments I’ve received (and also deleted) regarding it.

Not one of us ‘knows’ what is beyond this world. We can only judge by what we experience, what we believe and what we feel. In all my years visiting the Village, I have never felt that I or my family was in any type of danger and I would never want others to be turned off because of what they interpret from our experiences there. This image seemed too much of a hot button, and I thought it best to simply remove it.

This next photo is one I took once we were all down the stairs. I cannot explain this one either. Look toward the top right. 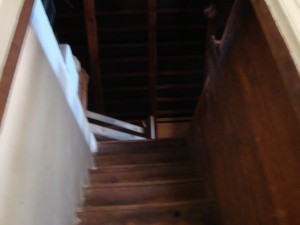 This last picture is one I took almost immediately after the one above. 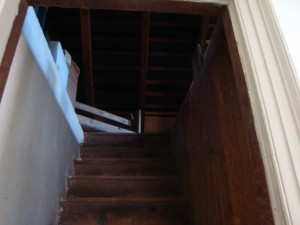 I’ll leave it to you to decide what these images mean. Your comments, opinions and/or personal experiences are VERY welcomed.

For more of my ghost experiences, check out my Ghosts of Gettysburg Posts – Part 1, Part 2, Part 3 and Part 4.

The birthday honoree in this house gets to choose whatever it is s/he wants to do on his/her birthday. I always choose something to do with nature – maybe a ride upstate to visit one of the mansions so we can later stroll the grounds and picnic under some shady tree or on the banks of the Hudson.

Since my birthday is today, the end of May, it’s always connected to Memorial Day weekend – and that means an extra day to play. 🙂

This weekend was fabulous. Daughter worked a fund raising event for the shelter all day on Saturday while Hubby worked. That meant I was free to write without interruption for several hours. I am now up to Chapter 11. Or just about.

I’ve slipped with my Book-in-a-week focus (obviously, since it’s been more like a month plus) but I’m still writing faster and tighter than ever before.

Sunday, we went to Old Bethpage Village Restoration. We go there often and never tire of it. It’s a living history village on Long Island. They’ve taken houses from around Long Island that date back to the 17 and 1800’s and relocated them on this property. It’s set up to look like a working farming village of the period. Like Williamsburg, Virginia, only not as well funded. It’s such a sweet and peaceful place that reminds us of all we have now as compared to the people of that time.

This is the only home in the Village that is original to the property. It was built in the 1700’s with rooms added on through the 1800’s. It was home to Quakers who worked the farm. The immediate area is still a working farm with some of the animals actual descents from the originals. 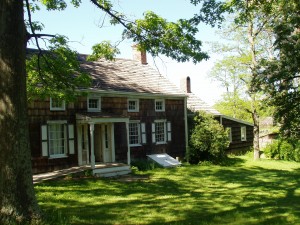 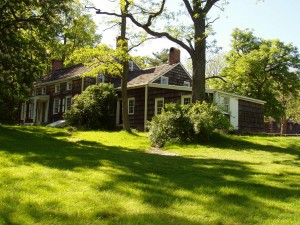 Some of the homes are classic stuctures that clearly stand the test of time. Isn’t this one beautiful? 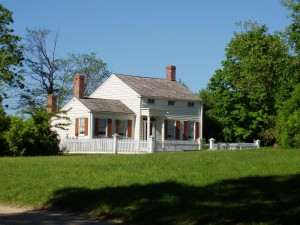 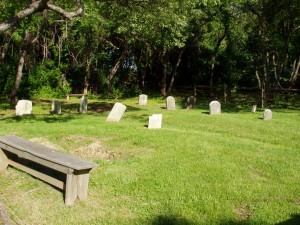 After dinner in a colonial era restaurant, we stopped near home, at Fort Totten, to watch the sunset. So pretty and peaceful, isn’t it? 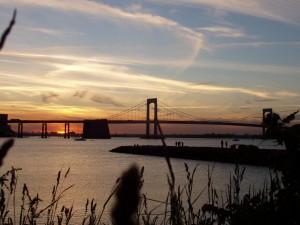 Yesterday, we went to Sands Point Preserve, a stunning reminder of Long Island’s Gold Coast history. There’s a castle on the property called the Castle Gould. In the 1920’s, the filthy rich Gould family had this home built in the style of Castle Kilkenny in Ireland.

It’s a stunning building and the property – including the drive in from the main road – is breathtakingly beautiful. However, after waiting two years for this castle to be built… 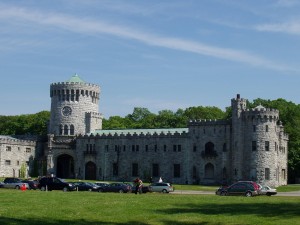 …the Gould family took one look and turned up their noses. They hated it and never spent a day or night inside of it. And there it sits all these years later, a gift to Nassau County. Lucky for us, I suppose, but hard to grasp the concept of just how much money these people had that they could simply walk away.

There are two other homes on the property which now belongs to the town. Hempstead House and Falaise. In all the years we’ve been visiting Sand’s Point Preserve, we’ve never gone on a day when Falaise has been available to tour. We’ve made it our mission to get there at some point THIS summer and finally see the place.

Hempstead house is lovely and, in my opinion, in a much nicer location than Castle Gould.  Hempstead House – side view, facing the Castle Gould (acres away) 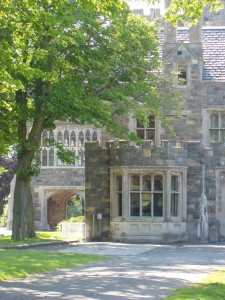 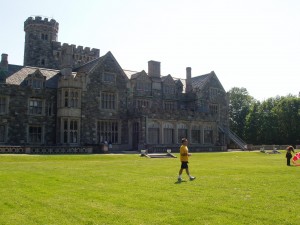 Harry Guggenheim had this house built and used the Castle Gould – which had been left to rot – as a carriage house.

He used the Castle as a carriage house. Imagine?

The view from the back of the house and yard is of the Long Island Sound and it is just magnificent, in my opinion. Since funds are low, Hempstead house is not as well-maintained as it could be, nor is it open for tours, but the bottom floor is often used for social or fund raising events.

Yesterday, we used the grounds to (try to) fly our Nemo kite. 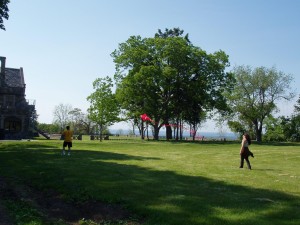 The kite, apparently, was afraid of heights, but check out the view of the Sound. ::sigh::

What a glorious day it was. What a beautiful weekend. A perfect way to remember our heroes, to start the summer and to celebrate yet another birthday.