We survived Wave 1 of the New Sonoma Diet – which is the most restrictive of the ‘waves’ but not truly restrictive when you consider the amount of food we were able to eat.

Wave 1 lasts ten days and is intended to retrain your body to accept and enjoy healthier, unprocessed, foods. To be honest, once I shopped for all the ingredients and stocked the fridge, I was quite impressed. It looked GOOD! Nothing went into the cupboards except some cans of beans, dried fruit, nuts and dried herbs. Everything else was fresh – veggies, fruit, yogurt, cheese, meat, fish.

Trust me – the recipes are phenomenal. We haven’t had one dish that wasn’t flavorful and filling. Even if you’re not looking to ‘go on a diet’, you might want to browse through the cookbook – The New Sonoma Diet Cookbook.  Daily menus are set up with recipes and their page numbers – the thinking has already been done for you though you can mix and match as you please within Waves.

Every meal has been an adventure – and, there was never a scrap of food left on the plates (take that as a sign of the deliciousness of the food or the hunger we felt at mealtime – either or both would be right.).

Of course, portion sizes are smaller than the American “Supersize” we’ve grown accustomed to, and the ratio of veggies to meats or grains has been adjusted. That might be the biggest change of all for me. I was used to serving pasta, rice, bread or potatoes with nearly every dinner. Carbs were a big part of the meal yet now I realize none of that is necessary for one to feel satisfied, though it’s a nice treat in moderate amounts.

All that said, this diet is not for anyone who is short on time. Meal prep, for me at least, seemed to take all day. I barely left the kitchen before it was time to return and start again. To be fair, this was all new to me, and I didn’t give myself enough time to read all the info before starting, so maybe there are hints in the book for less time-consuming ways to deal with meal prep. I don’t know. What I do know is that everyone in the family was happy with the meals and the outcome.

In ten days, our average weight loss was 4.5 pounds.

Yes, we all grumbled about not being able to nosh on cheese 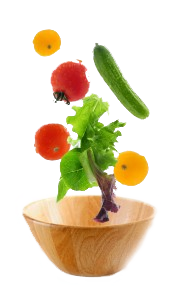 crackers or some other not-good-for-you mid-day snack. But once we got thehang of it and realized how to space out the snacks we were allowed to have – the occasional mozzarella cheese stick, an ounce of nuts, celery and nut butter, cottage cheese or yogurt and fresh berries – we found we weren’t as ‘hungry’ as we were ‘bored’. We’re snackers because we feel like doing something other than work. Grabbing a handful of chips during break time provided us with a quick fix. We simply had to retrain ourselves to avoid dipping our hand into a box of something and, instead, prepare a snack. It took time and discipline but it’s been well worth it.

Did I mention that the only day I wound up with a migraine during this 10 day wave was the day after we cheated by going out to dinner?  There’s something to be said about the wholesomeness of fresh foods. I’m happy we started this. I hope to organize myself better so I’m not so reliant on ‘the book’ and can prepare  healthier meals and menus on my own.

Until then… onward with Wave 2! Fourteen Days… or until target weight is reached.

Wave 3, then, will be maintenance – which we all know is a lifelong process.

Yes, you read that right. Today is Day 0 of our new Sonoma Diet routine.

As I mentioned in my last post, I love to bake. Sometimes, I bake way too much and run out of people I know and can’t seem to give it all away. So… guess where it winds up? In my house where each of us has the ability to nosh on a regular basis. That’s great for the taste buds. Not so great for the waistline.

So… before things get out of control, we decided, as a family, to get back into shape. We sit a lot – daughter with her schoolwork, me with my writing and hubster with his photography (digital editing, etc). We need to exercise, yes, but we also need to change the way we dine.

The Sonoma Diet is about a lifestyle, not about ‘dieting’, per se. It incorporates the sun-kissed freshness of the Sonoma Valley with the exotic, healthy and sinfully flavorful herbs, spices and recipes of the Mediterranean.

The main point of the Sonoma Diet, as I can see, is retraining your body to enjoy more natural foods and less processed food. It’s about enjoying the meal – dining instead of eating. Connecting with family and friends over a meal rather than scoffing down food while sitting in front of the TV. It’s about enjoying a glass of wine, feeding your sweet tooth, filling every craving without over indulging. It’s about portion control as well.

That might be the biggest hurdle for us since we are food whores and will try almost any type of food from any region in any part of the world. Notice, I said “almost”. But, we’ll be trading in our 12″, American-sized dinner plates for 9″ plates so lunch and dinner are not about gluttony but about enjoying the flavors and textures of our meal in a slow but satisfying way.

HA! That’s the goal. Let’s see how it actually pans out as we stomach-growl our way through Wave 1 – which is the most ‘restrictive’ (though it really isn’t) and lasts 10 days. Wave 2 follows and that allows for more food and flavoring options.  Wave 3 comes next and that, ideally, will last a lifetime since it’s about applying all the common sense attitudes and cooking all the phenomenal-looking Sonoma Diet recipes on a regular basis without obsessing.

Goal? We’re each shooting for about 12 pounds.

I will keep you posted!