If you’ve already read that first post, you should know a lot has happened since then. I’ve had the chance to listen to more recordings and view more images and have discovered more images – some in the photos I’ve already posted. Debunking some evidence has been easy in some cases and rather difficult in others. I have some recordings that sound intriguing but after hearing the same moment from my daughter’s or friend’s recordings, we realize there is nothing paranormal about them. Despite the evidence we feel is indisputable, disregarding or disproving any of it is a disappointment. Alas… as is the saying, “When in doubt, toss it out.”

For the evidence we believe to be accurate – we can start by having a look at the photo below. It’s from an early morning trek into Reynolds Woods. Originally, I saw two ghostly images in it – one on the path walking toward me, the other crouched in the brush toward the front left. It wasn’t until I looked at the image with a fresh eye, that I saw yet a third ghostly image in the same photo.

Here is the original picture with the two images indicated: 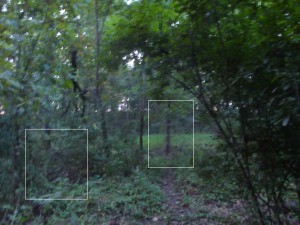 Now here is that same image with the discovery of the third ghostly apparition: 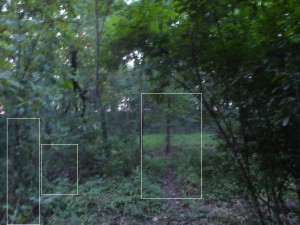 In my last post, I mentioned our experiences with temperature fluctuations in The Wheatfields. Well, I’d left my camera in the car so I don’t have photos from there but I do have an interesting recording. I didn’t hear voices while I was there, but on playback, I heard what sounds like mumbling as we speak and then through the silence, I hear something sad – a man whispering, possibly praying… using the words: “Help me.” “Take me.” “Hey.” Each plea is made a few seconds apart with “Help me” at :18, “Take me” at :21 and “Hey” at :26.

Can you hear them? (For a fuller experience, you might want to use headphones)

Voices in the Wheatfields

To move on with our experiences… after all of the experiences we had throughout the audio/auto tour of the battlefield, which I described in my last post, we went back to an area we had been the night before during a commercial ghost tour. This was a small field behind the Jennie Wade House. Jennie Wade was the only civilian killed during the Battle of Gettysburg. She was baking bread for the troops when a stray bullet ripped through the door and pierced her heart. She died instantly. There are ghost tales about her and her home, but I’ll skip all of that and tell you about the field behind the house since that is where we had several personal – and intense – experiences.

According to our enthusiastic, intriguing and lovely tour guide, Kendra Belgrad, some Confederate soldiers who were outnumbered in this spot by Union soldiers, chose to play dead rather than fight. On retreat, the Confederate soldiers who did fight ‘captured’ these men, called them cowards and said they would never have a hero’s burial but would instead remain in the spot where they failed to fight. The fighting Confederate soldiers then murdered the ‘cowardly’ soldiers and buried them in that field. It is said ghostly images are constantly captured in that field. There are images of orbs, of heads peeking around trees and of men leaning against the trees and holding their muskets.

These are the images we hoped to capture the evening after our auto tour. And we did capture them. Almost immediately.

Once on the field, I turned my camera toward the tree where a lot of activity has been reported. I took a few shots and noticed a red ‘glare’ in them. I’m a photographer’s wife, so I considered the first flare to be simple reflection of tail lights from cars parked in the lot beyond the tree. However, in each photo, the red glare was in a different position. First next to the tree “peeking”, then just around the tree’s edge and then more toward the center of the tree. I looked at each digital image as I shot it and on the fourth or fifth shot, I was stunned. So stunned, that when I glanced at my daughter, the expression on my face scared her into insisting I not tell her what I saw.

What I saw in that startling image was what looked like a soldier who had just been shot and had slammed back against the tree. His hat looks like it tipped down over his face as he slumped back and the red glare is on his shoulder – perhaps where the bullet hit.

Admittedly, the image is dark. I did not use flash and the area was back-lit by the hotel and streetlights. Still… if you look closely, you should be able to see what I saw here: 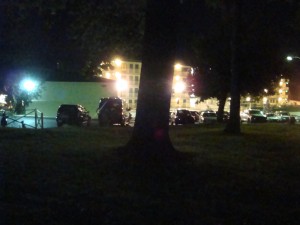 Here is the shot immediately after the one above – notice the soldier image is no longer there: 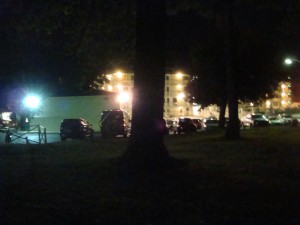 Perhaps they’ll both be easier to see here:
He’s here – 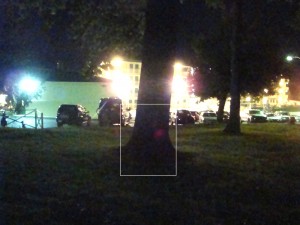 but not here (in the very next shot): 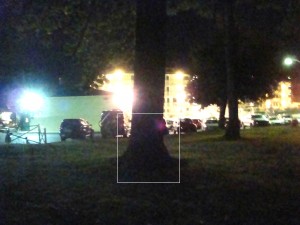 A few minutes later, in a different spot of the field, my daughter’s K2 readings went wild. K2 meters register high magnetic fields. The meter flickered throughout this experience but registered noticeably seconds before our friend said she felt as if someone was standing right between her and my daughter. I fired off three shots and the first one shows a soldier standing precisely where she said she felt a presence. The other two shots show nothing.

I’m pretty sure this one will be very easy to see: 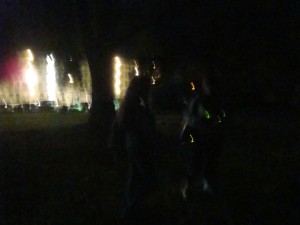 In case you can’t see him, here he is: 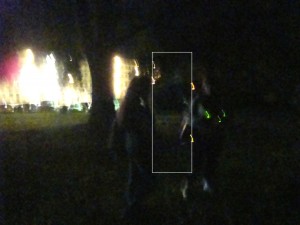 Of course, we captured a lot of orbs and other questionable images during our time there. I don’t know enough about orbs to say whether what we caught were spirits, bugs or some other natural phenomena. But… here are a couple of our orb photos and a couple of possible ghost images:

Odd mist in only one of four images: 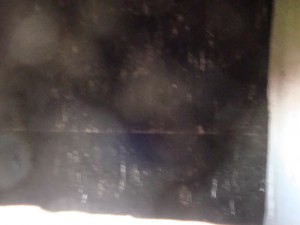 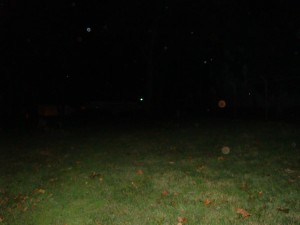 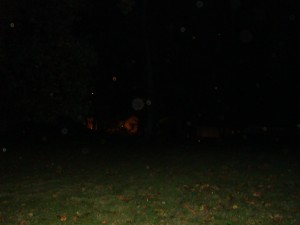 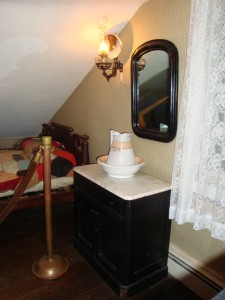 Here’s that last one cropped and indicated: 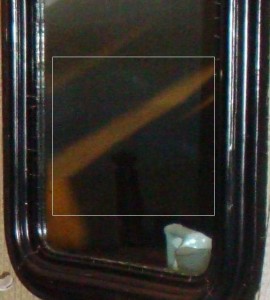 Don’t think this is it. We captured more voices and suspicious – or should I say “curious” – images and sounds. Here we were walking along Cemetery Ridge when we came upon some black walnuts lying on the ground. As we discussed them, there’s a long labored sigh then a very clear – stern – male voice seems to say, “Open!”. Not sure why he said that but, from his tone, he expected his order to be obeyed. Listen here…the ‘sigh’ happens as we’re walking at :08 and the ‘Open!” is at :15 ,right after I ask, “Are they edible?”

Sigh and “OPEN” at Cemetery Ridge

In my last post, I mentioned how each of us felt uncomfortable at Culp’s Hill. I posted audio of what sounds like the hammer of a rifle/musket and a voice saying, “Whisper!” as my daughter speaks. There are a lot more sounds – some clearly voices – from that spot and I’ll post another one here. It happened as we walked along an unsteady incline on our way further into the woods. Listen as my friend says she hears something and feels like she’s being watched. You’ll first hear my, “Ooo!” as I slip on an wobbly rock, then you’ll hear the drawn out whispered voice talking over us at :04 –

What do you think it says? We hear the words, “Get home!”

I’ll wrap up with two more experiences – in my next post. 🙂

One experience is something I cannot prove. I can only say all three of us endured it at the same moment, sharing our perceptions in real time and noting how each of us knew what the other was going to say before it was said. The experience was that vivid to us all. The other is one that just might make a believer out of the most skeptical among us. It made a believer out of my husband… and since he’s a photographer and our ‘proof’ is on video… that’s saying a lot.

Find Part 3 of my Ghosts of Gettysburg series HERE