The Agony of Defeat, The Thrill of Victory 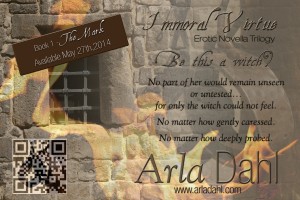 Thing is, I’ve given myself a deadline in the form of a date by which Book 1 in this trilogy – The Mark –  will be released. Look for it this spring. The cover for The Mark is being designed as I type this, a new website for the identity I’ve assumed as its author – Arla Dahl (www.arladahl.com) – is being created, I’m working on some swag, and I’m writing Books 2 and 3 in the series.

Which brings me first to the agony of defeat.

I had been struggling with a specific chapter and had therefore saved several versions of it so I could flip back and forth to cut and paste, combine, highlight, etc. After a full day of that – seriously, a FULL day – I had finally found my groove and produced what was as close to my vision for the chapter as I had come to date. And then I did something stupid – I clicked and clicked “undo” so I could get it back to a previous version to be saved with a different file name. However, instead, of clicking “save as”, I clicked “save”, thus overwriting everything I had done.

Like *that * a day’s work was gone. I was crushed.

This happened last night so the prickle of agony is still there.

This morning, I found myself questioning where to go from here, and thought I could easily move my deadline. It’s self-imposed after all. No one is counting on me but me… but…

With the Olympics having just ended, the words, “the thrill of victory, the agony of defeat” kept ringing in my head. And I remembered something one Olympian endured – a heart wrenching twist of fate which obliterated all chance of victory for him. As all Olympians, he had trained harder than most of us can imagine, he was pumped and ready to go. The bell rang. It was time for him to start, time for him to shine. He took off.. and stumbled. He, literally, tripped himself up. That amazing, talented man was then forced to spend what should have been the most thrilling moments of his life trying to recover from that fatal mistake. His dream was crushed the instant the clock started ticking and no amount of adjusting could save it.

THAT is the agony of defeat.

It can, however, become the thrill of victory. I have only to begin again. At least I, unlike the athlete to whom I referred, have that option.