There are bits of history everywhere. Too bad we’re often too busy to notice it, or too uninformed to be aware of it – even if it’s right under our feet.

There’s a bike path in Queens near Cunningham Park – the NYC Greenway. It’s a hidden gem not just for biking but for walking, if you’re so inclined. It’s approximately 3 miles and walking/biking from one end to the other will certainly give you a workout. I know because we walked this path yesterday morning – from one end to the other and back. So peaceful there in the woods… actually, there are no woods. Just clumps of trees on either side of the path, with homes beyond them. Continue along and beyond the trees there is the highway – Northern Parkway to be precise. So here you are strolling in what feels like a surround of nature when in reality you’re smack in the heart of the city. Ah, but the woodsy scent, bird songs and rustle of leaves as chipmunks and squirrels dart here and there make you forget about what’s going on beyond the trail. 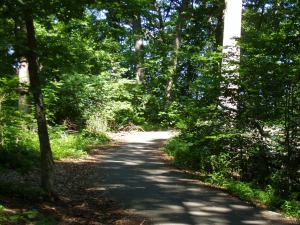 The trail was not always so quiet. In fact, it was not always a trail but a high-speed motorway designed, financed and built in 1908 by and for one of the Vanderbilts. William K., to be exact.

William K. Vanderbilt was a car racing enthusiast who built this highway with the intention of using it to hold the Vanderbilt Cup. The road was graded just so for racing, the curves meant to challenge. This private motorway was the first in the nation to use bridges and overpasses to avoid intersections. 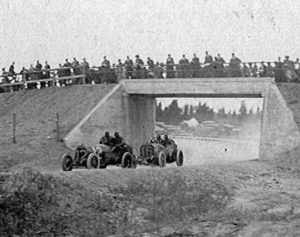 Two years of racing on this road, however, proved disappointing. Some spectators were injured and others killed during a race in 1910, and New York decided to disallow racing on anything but raceways – and that included private roads. No longer able to hold the Vanderbilt Cup, and with a need for help to pay back taxes, William K opened the road to the public – amazing that a Vanderbilt would need help paying for anything, yes? Twelve toll ‘lodges’ were built to collect a total of $2.00 in tolls. I guess you could say the road was opened to the privileged, not necessarily the public at large. These socialites traveled the road at high speed – 60mph! – in order to reach the gold-coast party circuit, then travel it back after the parties wound down. Clear sailing from Queens to Suffolk County, New York. Forty-five miles of scenic road.

Toll collectors lived in the toll lodges. Reminds me of the guards on the Great Wall of China who lived right there on the wall – their lives spent patrolling and nothing more.

This is the Meadow Brook toll/lodge

With the birth of Prohibition in the 1920’s, the road had new purpose. Rum-running. As a private road, there were no obstacles to this process, and rum-runners certainly had the funds for tolls. Ah, but William K. didn’t approve and so brought in state police to… well… police the road and run the rum-runners out.

Eventually, the road became obsolete. The need for high speed ways to get from here to there was met by the city and state. Northern Parkway was built – a FREE highway with bends and curves more conducive to leisurely driving than racing. Motor Parkway was eventually given to New York in exchange for back taxes still owed. Fourteen miles of the original road have been modified for today’s use, but sadly, other areas of it have become obscured by time, weeds, neglect and ignorance.

The three mile stretch that still exists in Queens contains some of the original cement guardrails – 100 years old.

(Old and new together – Early 1900’s cement guard rails in foreground, with early 2000’s metal guard in back.)

They show age, they show neglect. They don’t come close to showing us the grandeur they once proudly guarded. And yet, they remind us to ask questions and seek answers of a past long forgotten, and truthfully, can we ask more than that?